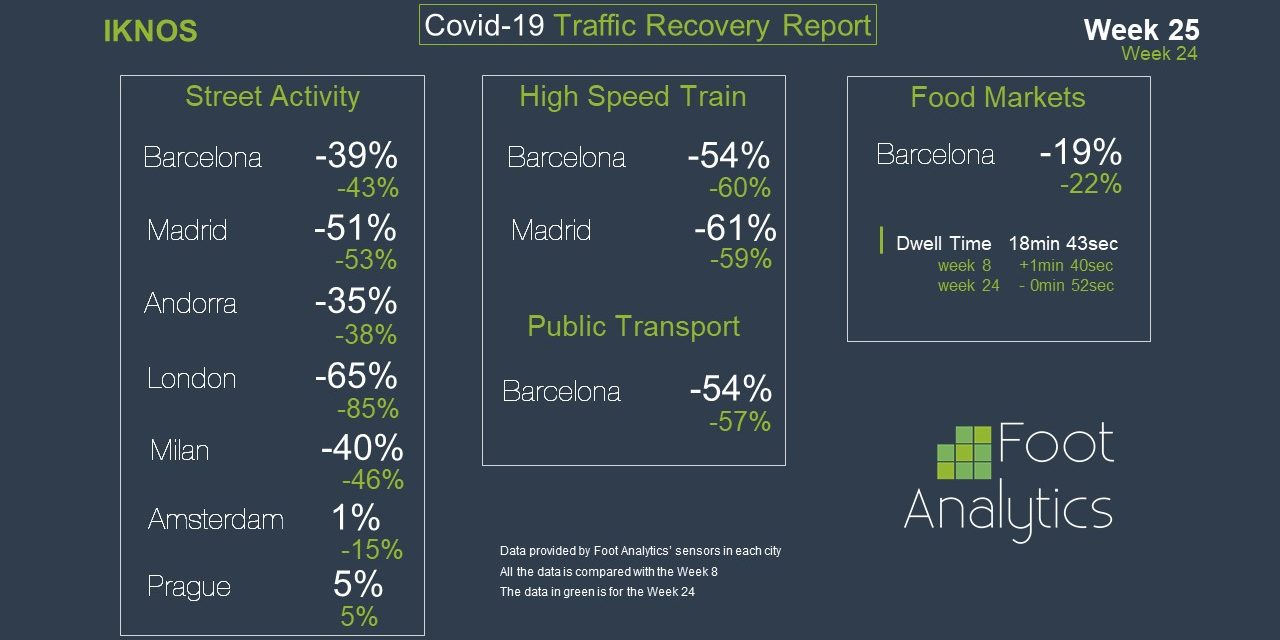 In our tenth Street Traffic Recovery Report, we are sharing and analyzing data on post lockdown recovery in terms of the traffic of people in Week 25. As seen in the previous weeks, Prague has fully recovered the decrease in street traffic experienced during the Covid-19 pandemic, registering a +15% upon the data of Week 8 (considered as the last week prior to the lockdown). Amsterdam has also recorded a positive data on street traffic for the first time, scoring +1% compared to Week 8. In the meantime, the situation in southern Europe kept improving, although at a slower pace: street traffic in Barcelona was down to -39%, meaning a 4pp improvement from the previous week; Milan kept growing as well, registering an increase of 6pp and scoring a -40% with regards of Week 8. Madrid, as from last week, was still the city showing the tiniest improvement: a 2pp increase that led to a -51% from Week 8. Finally, the situation in London probably represents the happiest news of Week 25, with street traffic improving by an astonishing 20pp and registering a -65% compared to Week 8.

Concerning the traffic among the public services in the cities analyzed, we could say that the situation was very much aligned with the week before: traffic on the high-speed train service connecting Barcelona and Madrid increased by a few point percentage on average, with Barcelona scoring a -54% and Madrid a -61%. Traffic improved also on the Barcelona Metro Service, up by 3pp and registering a -54% compared to Week 8.

The traffic at the Food Markets in Barcelona has also improved, up by 3pp from the week before and scoring a -19% on Week 8. What remains more unpredictable is still the Dwell Time inside the food markets, down by almost one minute from the previous week but still one minute and a half higher than on Week 8.

With traffic recovering in every city analyzed and surpassing street traffic of the pre-lockdown situation in a couple of them, we are looking with excitement towards how data will evolve on the current week. See you next Tuesday with more updates!