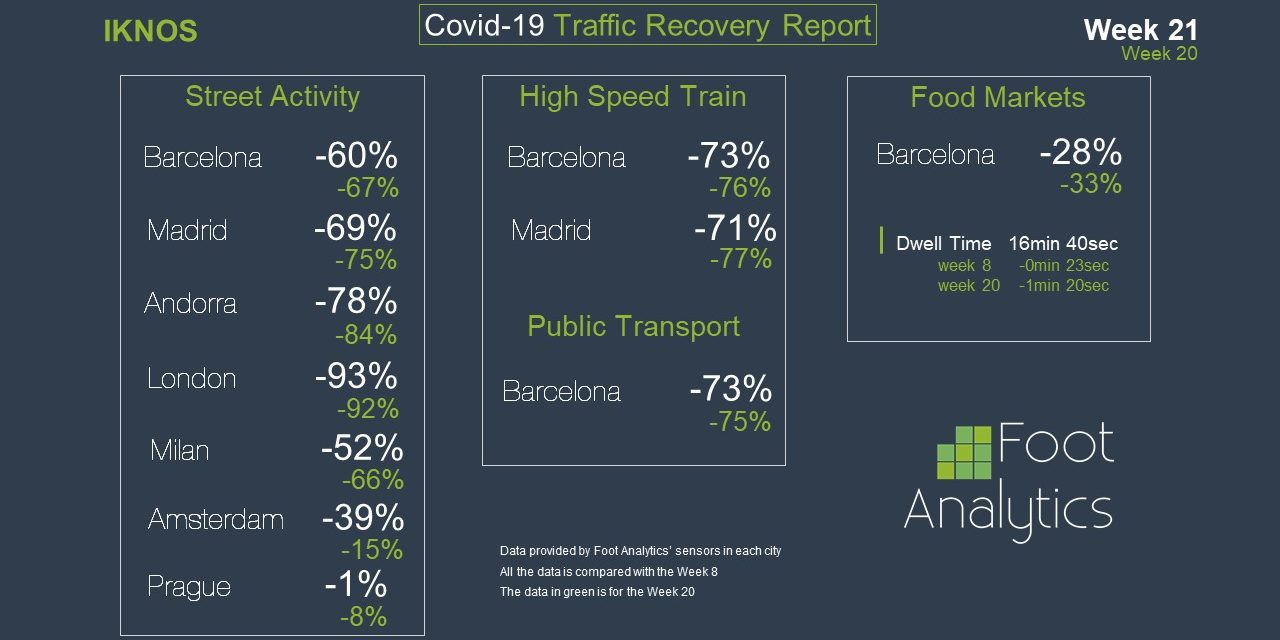 In our sixth Street Traffic Recovery Report, we are sharing and analyzing data on post lockdown recovery in terms of the traffic of people in Week 21. As from the previous week, traffic recovered in most of the cities analyzed; Prague has almost come back to normality, scoring only a -1% with regards of the situation pre-Covid19, while Barcelona and Madrid experienced a further increase of 7 and 6pp in the traffic of people due to the partial ease of the restrictions. Milan registered a big +14pp increase in traffic, in line with a more substantial ease of the restrictions all over the peninsula; we are expecting similar effects of Spanish cities starting from next week. Finally, very peculiar is the case of Amsterdam, that went against the general trend of recovery by registering an impressive decrease of traffic of 24pp, although this could be largely explained by the fact that in one of the days in which the measurement occurred it was national bank holiday in Netherlands.

Moving to the public transport sector in Spain, we haven’t registered any significant changes from the previous week; the traffic on the high-speed train connecting Barcelona and Madrid registered an increase or traffic of 4pp on average, while the metro service in Barcelona experienced a traffic increase of 2pp. Despite a partial ease of regulations, it seems that people were still very cautious in using public transports.

Finally, very significative is the data picturing the situation in the food markets in Barcelona. In fact, together with an expected further increase in the traffic of people inside the markets, going from a -33% to a -28%, we can also observe a relevant decrease of the dwell time below the level of the situation pre-Covid19. A possible explanation for that could be a temporal change in customers behaviours; given the restored sense of freedom and the more spare time during the day, people might decide to stop at a food market also to buy a single product and not just for bigger groceries, hence decreasing the average time spent inside.

As Barcelona and Madrid officially entered phase 1 of ease of regulation on Monday 25th, we are expecting data available next week to showcase strong changes in the traffic flow of people in the two biggest Spanish cities. Stay connected.