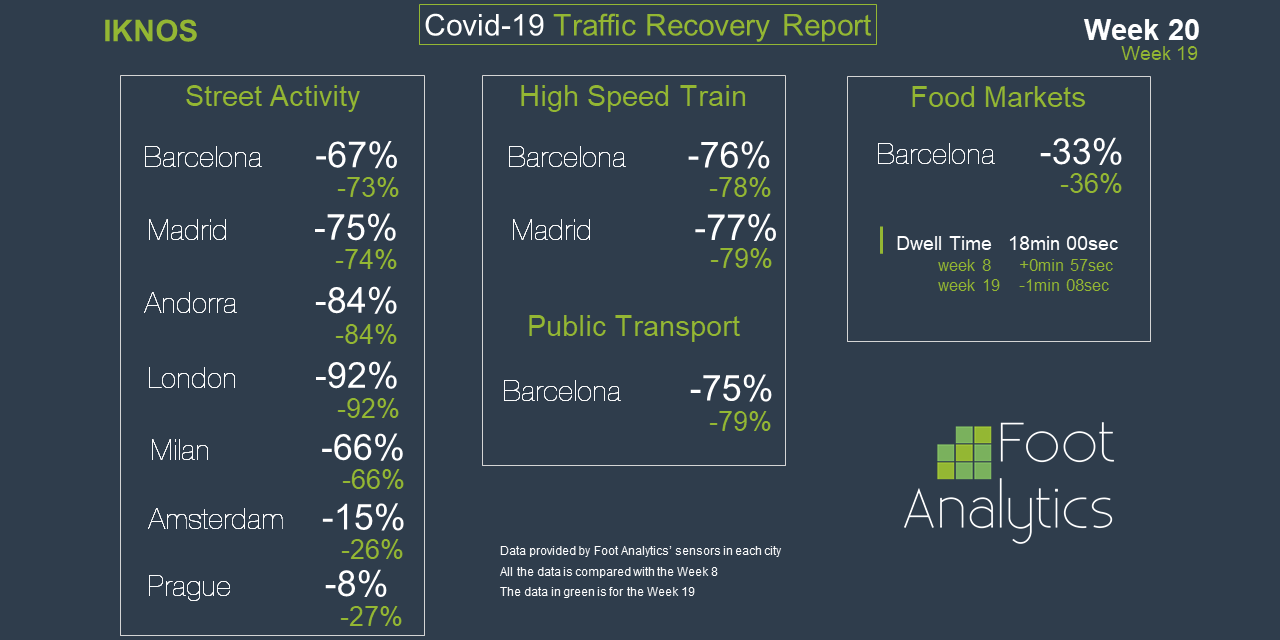 In our fifth Street Traffic Recovery Report, we are sharing and analyzing data on post lockdown recovery in terms of the traffic of people in Week 20. Despite significant differences still existed between the traffic of people in the cities analyzed, a general and substantial recovery trend can be identified. As for the previous weeks, Amsterdam and Prague were still leading as cities whose traffic has been less affected by the pandemic aftermath; especially, Prague scored an outstanding +19pp in the traffic registered with respect of Week 19, reaching a -8% of traffic compared to the normal situation pre-COVID-19. Traffic registered in Milan and London remained stable, respectively to -66% and -92%, as nothing changed in terms of ease of restrictions from Week 19. Very interesting is instead the situation registered In Barcelona and Madrid; in fact, despite having the same level of restrictions applied (the Spanish Phase 0), traffic in Barcelona increased by 6pp, while in Madrid it decreased by 1pp.

Focusing more on Barcelona, the situation on the public transports was in line with the moderate positive trend saw in the traffic around the city; traffic in the Barcelona Metro service increased by 4pp, reaching -75% compared to the normal situation pre-pandemic, while traffic on the high-speed train connecting Barcelona to Madrid increase by 2pp.

A very much comparable situation was also the one registered among the Food Markets in Barcelona, where traffic increased by 3pp. As explained last week, Dwell Time is a very interesting piece of data to look at when analyzing the situation in the food markets; in fact, despite being higher than the normal situation pre-COVID-19, the dwell time of people in the markets kept decreasing the more we were approaching a situation of semi-normality. People going back to normal purchase habits, without stocking up, and consequent shorter lines and the checkouts could be reasonable explanations to this phenomenon.

We are very much looking forward analyzing the data from this week, with a boom on the traffic of people expected in Milan as a consequence of further ease of restrictions, and a slight improvement of the situation in London. For Barcelona and Madrid, we will probably have to wait a bit longer to see register significant improvements in the level of traffic, but Week 21 might have some surprises. Stay connected!